Osseointegration is a surgical procedure that permanently anchors an artificial limb into the bone. It is currently offered at only 10-15 medical centers across the United States, including Keck Medicine of USC.

Three years ago, Robert Johnson, 28, had his right leg amputated above the knee due to osetosarcoma. After the wound healed and six months of chemotherapy, Robert was cancer-free. He was fitted with a prosthetic leg that connected to his residual limb with a cuplike shell or “socket,” traditionally the only type of prosthesis available. However, the socket didn’t fit well, resulting in painful skin irritations. The leg was difficult to walk on or even stand on, and sometimes fell off. The husband and father could not work, exercise or even pick up his young daughter for fear he would fall and drop her. 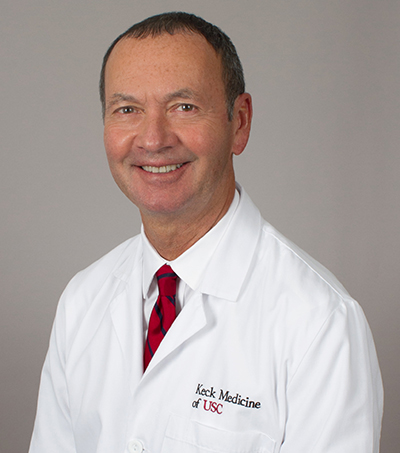 Lawrence Menendez, MD, an orthopaedic oncologist with Keck Medicine of USC and a professor of clinical orthopaedic surgery at the Keck School of Medicine of USC, is one of only a few surgeons in the country to have extensively trained in osseointegration. Menendez determined that Robert would be an excellent candidate for osseointegration, and Robert finished the second surgery in June 2021.

The technique was developed in Sweden some 25 years ago, and has been performed there for many years. Osseointegration for adults with above-the-knee amputations was approved by the U.S. Food & Drug Administration in December 2020.

During a two-part procedure, a metal implant is inserted into the bone of the residual limb remaining after the amputation. The bone grows into the implant until the implant is secure and fully integrated. Next, an additional device is attached to the implant, which protrudes from the skin and attaches to the prosthesis. Patients take up to a year to heal from the surgeries and require physical therapy.

The benefit of osseointegration is that it eliminates the need for a socket, which solves the fit problem that Robert, and many others who wear a prosthetic limb, experience.

Typically, said Menendez, socket prosthetics either fit too tightly or too loosely around the stump, causing skin irritations and infections and putting people at constant risk of falling.

Osseointegration allows for a stable attachment of the artificial limb, improving mobility, range of motion and avoiding skin irritations. It also gives patients an increased sense of proprioception, the awareness of the position and movement of the body, according to Menendez.

“The end result is that patients are out of pain, better able to stand, walk and climb stairs, and can get back to more physical activities they enjoyed before the amputation,” he said. “We hope that this procedure can improve the quality of life for patients who have undergone an above-the-knee amputation such as veterans, bone cancer patients and people who have been in accidents. We believe that Robert is just one of many we can help.”

Relieved of socket issues, Robert can now stand for relatively long periods of time on his prosthetic leg and is able to work out at the gym for the first time in three years. When he walks on the treadmill, he is thrilled that when he sets his foot onto a surface, he can feel the sensation.